One of the primary features of a version controlled database is you can merge two copies of the data stored in it in a principled way, "data merge", so to speak. Much to our surprise there is a popular product called "data merge" that dominates the search results. 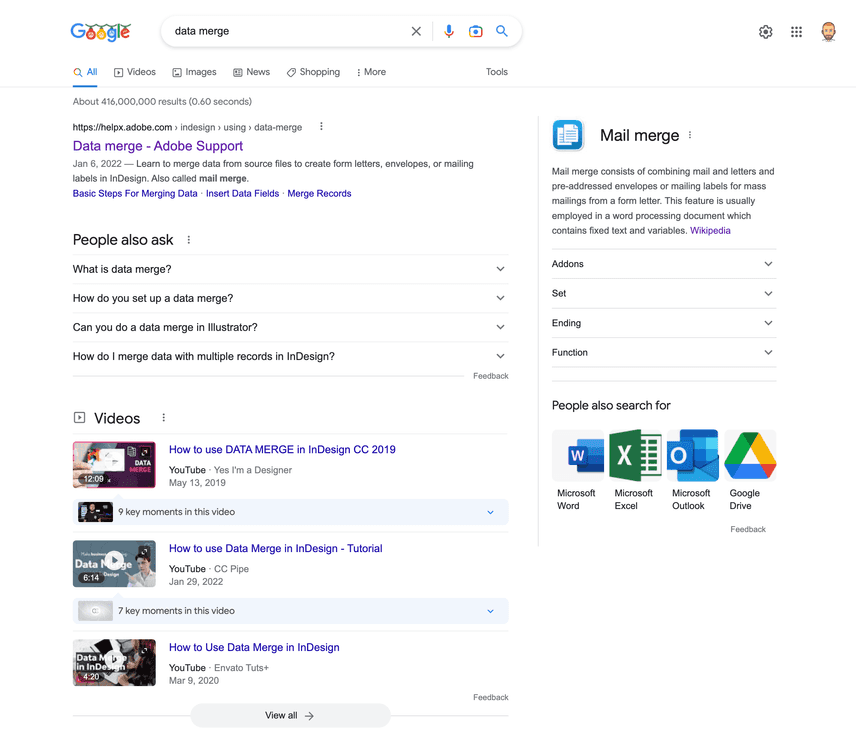 We have new technology. We've come to take the "data merge" term back! This blog is our attempt.

Data Merge is not Mail Merge!

It turns out there's a product called data merge in Adobe InDesign. It was originally called mail merge and it was rebranded. WTF!

Mail merge is basic templating for letters where fields like <<Company Name>> and <<Address>> are replaced with the actual company name and address of the recipient as listed in another file, usually a spreadsheet. Mail merge is basically a bridge between a spreadsheet and a document. All the big players in office software, Adobe, Microsoft, and Google, support mail merge.

What is Data Merge?

But what about real data merge? I have data in two tables and I want to merge them together in a principled way? How would that work? What happens when there are merge conflicts?

Data generally comes in the form of tables but the concepts here apply to file-based formats like CSVs or hierarchical data formats like JSON documents. Based on my expertise and for simplicity, I'm going to discuss data merge in terms of tables.

Let's assume the data has the same schema: same primary keys, column names, and column types. If the tables have different schema, merge can get a little complicated. A set of rules would need to be defined for schema merges and conflicts. Once schemas are merged, you could proceed with a data merge.

Let's explain with an example. Let's say we have a table of image labels and bounding boxes. We start with one image and two labels, "fruit" and "bowl".

The second user is interested in classifying the fruit in the bowl for a different problem.

In SQL, there is a way to merge data from two tables with the same schema INSERT ON DUPLICATE KEY UPDATE.

This yields the following table:

Is this a valid merge? Maybe. There are a few problems with this approach.

The first problem is conflicts. The part after ON DUPLICATE KEY UPDATE specifies what to do in the case of a key collision conflict. Do you keep what you have or take what the other table has? You need to define what to do in a single SQL statement. That can get complicated. Also, what if both tables changed different cells? You may be forced to overwrite one with the other. Conflicts are hard to deal with and a database with true data merge can help manage them.

The fourth problem is speed. This approach requires a full table scan of table2 and an indexed lookup of each primary key for each duplicate, even if the tables are the same. An ideal merge approach would scale with the size of the differences between the two tables, not the size of the data in the tables. A database with data merge would be able to perform merges fast.

Thankfully, there is a novel data structure called a prolly tree, pioneered by the good folks who built Noms. A prolly tree is a content addressed b-tree. Prolly trees are fast to query like b-trees but also fast to compare. When you combine a prolly tree with a Merkle DAG, you can build a Git-style version controlled database you can three way merge.

A database built on prolly trees can track conflicts, structurally share data between versions, handle deleted rows, and do all this fast. We know because we built one and it's featured later in this article.

Why do you need Data Merge?

Data merge is a hard technical problem. Presently, only two databases can do it. One can do data merge on graph and document databases. The other can merge SQL databases.

A Terminus data merge example is well documented so I won't repeat it here. When you merge and Terminus identifies a duplicate record, record information is appended. The provenance information is stored in the record so the user can pick which side of the merge to use.

TerminusDB is new and we like what we see. The company is very responsive, has an active Discord, and is well funded.

Dolt is the first and only version controlled SQL database. Dolt is like Git and MySQL had a baby. Dolt can be run on the command line, like Git or as a running server, like MySQL.

Data merge in Dolt is built on top of prolly trees and a Merkle DAG like we explained above. Data merge can produce conflicts, structurally share data between versions, handle deleted rows, and do all this fast. Dolt can merge data and schema. Dolt merges rows across versions using primary keys.

Going back to our example, now with a version controlled database. Instead of creating a temporary table we will create a branch and use the same table. We made a commit after creating the image_labels table.

The first user will modify main with the same SQL:

A conflict is detected because the first user modified a row that the second user deleted. If I want to produce the above merge result I just delete the conflicts from the dolt_conflicts table but I can produce whatever merge I results want. Let's say I want to keep the update but only on the apple label and now I'm only interested in fruit.

This produces the following merge but the power is telling the user there were conflicting edits and allowing any merge to be produced.

Obviously, we're a little biased but we think Dolt is the best of breed tool for data merge. Want to discuss? Come talk to us on Discord.