What is an immutable database?

Immutable databases are append-only databases – data can only ever be added. If you want to change or delete an entry, a new entry is created and the old entry is marked as belonging to a previous version. Thus, all history of how a database became the present state is preserved. This makes auditing data changes possible because the audit log is tamper resistant.

In order to make this possible most immutable databases rely on some form of two technologies: cryptographic signatures and Merkle Directed Acyclic Graphs (DAGs). These technologies prevent data from changing without the database knowing and allow data to be shared between multiple versions efficiently and quickly accessed.

What did we used to do?

Before immutable databases, if you wanted to build a database with an audit log, you accomplished the task with schema. The term of art for this is Slowly Changing Dimension. This is not true immutability. You build a schema using columns that indicate inactive or active or "active from" to "active to" dates. Version number or timestamp columns on rows can also be used. Then, your application uses these columns to construct present and historical views of the data. Your application never deletes, just changes state from active to inactive. I don't think anyone would consider this type of database truly immutable as the application or an operator can still make a mistake and modify or delete a record. But from the application's perspective, you get an audit log and history of every record in the database.

There is also SQL "as of" syntax. This is in the SQL standard as of 2011 (pun intended) and supported by Oracle, Microsoft SQL Server, and MariaDB. With this syntax you can configure a table to be versioned and then query a version using as of <timestamp>. Tables configured this way are called "temporal tables". Temporal tables generally comes with scale limitations, hence the need for a new category of database to handle this use case.

Ledgers are simplified, centralized versions of blockchains: blockchains without consensus. Ledgers offer the immutability of a blockchain but for use cases where there is full trust in the writers. In this Is Dolt a Blockchain? article I make the case that decentralization and automated consensus are the main features that turn a ledger into a Blockchain. 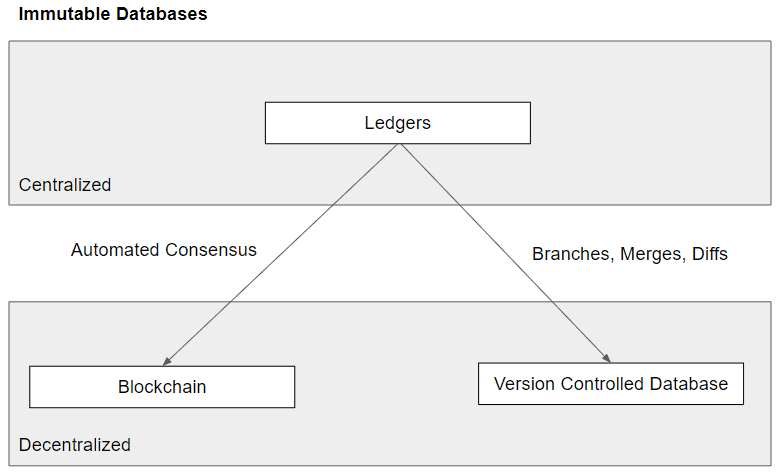 For the rest of this article, we ignore any Blockchain solutions like Hyperledger Fabric or Ethereum. (EDIT: If you're interested in this category, we wrote a useful survey of the decentralized database category a couple months after this article was published.) The public blockchain space gets enough analysis and publicity, even Gartner is weighing in. We don't have much to add and we'd rather focus on Ledgers and Version Controlled Databases that don't get much written about them.

What are immutable databases used for?

Immutable database are useful for data that you want to secure and audit.

Amazon QLDB does a good job laying out the high level use cases for ledgers. Note the focus on security and auditability.

We will examine the following solutions:

This list is by no means complete. If we missed your non-blockchain immutable database, please reach out to me at tim@dolthub.com.

Amazon QLDB is the only hosted, non-open source product we'll discuss. QLDB supports a "document-oriented data model". The query language is PartiQL, a new open source document query engine. Accessing history is done through the built in history function, a PartiQL extension. To get an audit log of your database, you need to export the journal to an S3 bucket in JSON, text, or Amazon ION format.

AWS is a known quantity at this point. It's the cloud infrastructure leader. If you want a hosted ledger and are already in the AWS ecosystem, Amazon QLDB is for you. The user experience around auditability is a little lacking but the product is new so I'm sure it will get better over time.

ImmuDB is an open source immutable database written in Golang. It can be run client-server or embedded. ImmuDB uses a subset of the PostgreSQL SQL dialect.

Accessing history is done through a set of history functions. In SQL, there is some custom syntax to access history.

Additionally, ImmuDB has a separate auditor to ensure your database has not been tampered with. This added layer of security would be useful in some use cases.

ImmuDB is a great, open source alternative to Amazon QLDB. If you are looking for a ledger you can run yourself or a ledger to embed in your application, check it out.

TerminusDB is new but we like what we see. The company is very responsive, has an active Discord, and is well funded. If you think your immutable database needs database version control in graph or document form, check them out.

Dolt is an immutable database that leans heavily on Git version control metaphors and syntax. Dolt implements the Git command line and associated operations on table rows instead of files. Data and schema are modified in the working set using SQL. When you want to permanently store a version of the working set, you make a commit. In SQL, Dolt implements Git read operations (ie. diff, log) as system tables and write operations (ie. commit, merge) as functions. Dolt supports AS OF syntax using commits, making history queries user-friendly. Dolt produces cell-wise diffs and merges, making data debugging between versions tractable. That makes Dolt the only SQL database on the market that has branches and merges. You can run Dolt offline, treating data and schema like source code. Or you can run Dolt online, like you would PostgreSQL or MySQL.

We are biased but we think if you want an immutable SQL database with version control, there is only one product that fits that label and that's Dolt.