Dolt is a SQL database with Git-like functionality. It supports version control primitives including commit, branch, merge, clone, push and pull. This is the fourth post in a series exploring how Dolt stores table data implements these version control primitives. Previously, we looked at the content-addressed sorted index structure underlying Dolt's table storage, called a Prolly-tree. In the second post, I explained the Dolt commit graph and how table storage in Dolt is shared across revisions of the table. In our last post, we talked about implementing diff efficiently on top of Prolly-trees.

In this post, we're going to look at how Dolt implements merge by using a cell-level three-way merge algorithm.

Merge is a fundamental operation in (D)VCS and finding a way to do effective merges of source files in version control systems is what allowed VCS implementations to move away from file locking and into a workflow where multiple people can work on the same files at the same time.

The fundamental question is how to construct the newDatabaseValue given the two database values which should be merged. There have been numerous solutions to this problem in a variety of contexts, including collaborative file editing, databases and version control systems. Dolt takes its approach to merges from Git, and it implements a traditional algorithm from VCS, a three-way merge.

A three-way merge works in the context of the commit graph and a recorded and available history for how the database came to have intoDatabaseValue and fromDatabaseValue. It builds on top of diff, which was explained in my previous blog post and it works on three independent commits:

On a Dolt commit graph, with the commits pointing to their parents, this looks something like: 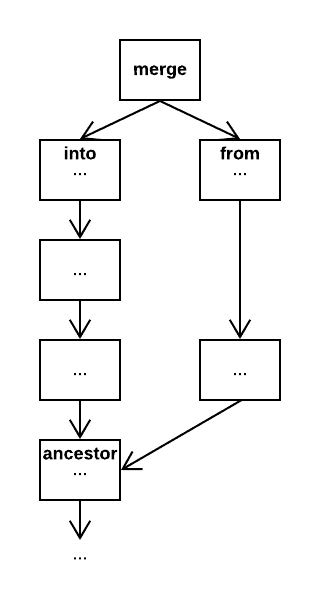 The nearest common ancestor is the ancestor where the commits most recently diverged from each other.1 We find this commit by walking the parents of into and from in breadth-first order until we find a common commit.

A cell-level merge means that the merged value for that row is not a conflict if the changes didn't touch the same columns. Specifically:

Here's an example of the two diffs merge might be operating on:

In this example, california will be covered by case #1, new york by case #2, and usa by case #3. texas, because it is modified in both branches and has a conflicting column value, will end up as a conflict in case #4. vermont will also be handled by case #4, but because the two branches modified different columns, there will be no conflict. The resulting row will reflect both changes: a population of 623,989 and a capital of Montpelier.

In reality, when implementing the above algorithm, Dolt is operating on an editor for the table data in into, not ancestor. Thus, Dolt skips over entries matching step 1 and 3, it applies all the diffs matching step 2 to the current table value, and it applies the cell-level diffs on non-conflicting changes matching step 4 only from from.

The result of the merge algorithm is a new table value for the table in the working set plus a possibly empty set of conflicting rows which could not be merged successfully. Conflicts in Dolt are always on a row in a table. The primary key is the same between into and from, but the values for at least one column in the row were different between the two commits and that column's value was changed by both histories since ancestor.

Conflicts in Dolt are stored by primary key along-side the table data for the table, in a separate Prolly-tree from the table data itself. Each row in the conflicts Prolly-tree stores the value of the row as it appeared in all three commits involved in the merge: into, from and ancestor . This allows for programmatic resolution strategies to see the relevant row-related data if necessary.

Conflicts after a merge can be resolved one-by-one, by setting the row to a certain value and removing the conflict from the conflicts row data. Dolt also has built-in bulk resolution strategies, such as take-ours and take-theirs. For example, to merge a feature branch into your current working branch and overwrite all conflicts back to their values as they are in your current working branch, you an do:

Currently Dolt considers any table that has unresolved conflicts in its conflicts Map to be unmerged and it will not allow a commit to be created with any unmerged table values. That means that table values that carry conflicts cannot appear in commits. This is a small divergence from git, which places the conflicts as textual markers directly in the working tree (if those files are text files) and will allow files with conflict markers to be staged for commit with something like git add -f.

We took a quick look at how three-way merge works and saw that it applies very naturally to table data as Dolt represents it. While a cell-level three-way merge isn't the most natural fit for every database merge use case, we think it's a really good starting point for human scale databases that have feature-level collaboration. That being said, this space is one corner of Dolt that's ripe for innovation, and we hope to see a lot of feature work here in the future. Some things we would to implement include:

If you have any feature requests in this space or any use cases that aren't currently well handled by the cell-level, please reach out to us.