Dolt is a version controlled SQL database — a database where users and their applications can branch, merge, push, pull and clone the value of their database. It works on a similar model to git, where commits referring to a snapshot of a value for the database are created on branches and each commit can have one or more parent commits.

Storing all historical revisions of the database allows for some really neat workflows, including analogs for things like git blame. You can answer the question "When did this cell in this table get this value and what else changed in the same commit."

Because databases are somewhat different from source code repositories in how they get updated, we recently released some changes to how Dolt stores commit parents. These changes allow Dolt to more efficiently calculate common ancestors when performing a merge and to more efficiently push and pull missing chunks when performing operations against a remote with a deep divergent history. This blog post examines some of the differences in the use case we see and what we've implemented so far to improve things.

As we started to focus more and more on the OLTP use case for Dolt, we quickly noticed that Dolt commit graphs could reasonably become very deep and, in a lot of cases, would be largely linear. In contrast to an SCM, where changes are often made by humans and even automated systems operate at relatively low throughput, a database can realize many orders of magnitude more changes in the same period of time. For example, a database processing less than 12 transactions per second will create 1 million commits a day; and 12 TPS is low throughput for a database in an OLTP context. In contrast, the linux repository has about 1,000,000 commits after 20 years of development, and Google's google3 repository was reported in 2016 to have ~35 million commits.1

When we were running the menus bounty, we were firmly in the data collaboration use case, not an OLTP use case, but we still had commit histories of 100,000 commits after just a few weeks. We also had tens of thousands of pull requests open at a time, whose merge status needed to be updated every time the destination branch received a push.

These observations, combined with our operational experiences during the menus bounty got us thinking about how to improve the performance of certain types of commit graph walks. In particular, we want to have credible performance for fetch/push/pull on very deep histories and for calculating merge status and merge roots for very deep histories. We recently released some changes to how Dolt stores commits that improve the performance of both of these things.

A Model For Commits

A Dolt commit is conceptually very simple. We can store a content-addressed serialized struct in the database that looks like:

Each commit has the addresses of its parent commits in its commit struct. As explained in my blog post about how Dolt performs merges, in order to merge two commits together dolt performs a depth-first walk of the Parents field of the commits to find the nearest common ancestor. In the case of a very deep history, this can require a very large number of serial round trips to storage to get each Commit struct before the walk knows what it is going to need next.

In the same way, as explained in my blog post about push/pull, a big performance win for push and pull can be batching the chunks we know we need to fetch. But in the menus bounty use case, for example, once the remote had diverged by 50,000 commits from a local clone of it, fetching could take a very long time not only because there was a lot of new data to fetch, but also because the algorithm made lots of serial round trips to the remote without being able to fan out and batch very much.2

With this in mind, we implemented a change to the commit struct to materialize an ancestor closure at the time we write the commit.

Finding a common ancestor between two commits and fetching or pushing to a remote both do a breadth-first walk of commit DAG. We observed that we have a database with cheap point edits, and especially cheap appends, on content-addressed Map data structures. Not only that, but this Map data structure underlies all table and index data we store in Dolt, and we have every intention of making those kinds of edits cheaper, in terms of CPU, memory, and storage overhead, in the future.

We can leverage this data structure to materialize the commit closure of a commit's ancestors at commit time. Concretely, we can write a prolly tree value when we write a commit, and the value of the prolly tree can be a map where there is a key for every ancestor of the current commit. The value for the entries can be the corresponding keys for that commit's parents. It looks like this:

Now a breadth first traversal of a commit's ancestors can proceed as a simple reverse linear scan of the keys of the Ancestors map. Finding a common ancestor for two commits is just a linear scan back from each of their Ancestors maps until we hit a commit that they have in common. And putting all the commits reachable from a commit in a compact format quickly reachable from the commit itself lets our naive push/pull algorithm fan out and find the missing chunks between a remote and a local clone much faster.

Software engineering is all about tradeoffs and this is a classic space/time tradeoff being made. Concretely, to materialize this map requires a few things in Dolt:

In both cases, we estimate that the amount of work we need to do to maintain this closure, in both CPU time and disk storage overhead, it likely to be small relative to the amount of work necessary to carry out the user's actual operation. For example, in the case that the commit represents a SQL transaction that updated a single row's value, we had to update the table data prolly tree with that row update. In many cases, even single row updates result in multiple updates to prolly trees in the database value, because they touch things like indexed columns. And many SQL commits update more than one row, of course.

In the same way, if two branches have widely divergent commit histories and are now being merged, it's reasonable to expect that there will be work to do proportional to the size of their commit histories, and that the performance of the merge will not be heavily impacted by merging the Ancestors maps as well.

There are definitely degenerate cases where neither of these assumptions are true. A very long history of empty commits which do not change the database value will dominate CPU on commit creation and disk storage on just storing these materialized Ancestors. Two long divergent branches where each branch works on an independent set of tables (with no foreign-key references between them) will merge trivially for the database value, but will still have to materialize a correct Ancestors map. But for now, we are happy with the tradeoff because we see increased performance for the use cases we actually have.

But Is It Faster?

The whole point of materializing commit ancestors is to make push/pull and find common ancestor faster. So it's worth measuring it and seeing if it was worth it.

We cloned the repository and rewrote our clone to include the commit ancestors map in the commits. After pushing our clone to a remote, we truncated our local clones of both repositories to about half-way through the commit history and garbage collected the local repositories. The resulting sizes were ~30GB and we had 57,436 commits left in our local clones. That means we needed to fetch 51,767 commits from the remote server and about 30GB of data. The fetch went from taking 47 minutes 23 seconds to taking 14 minute 21 seconds. 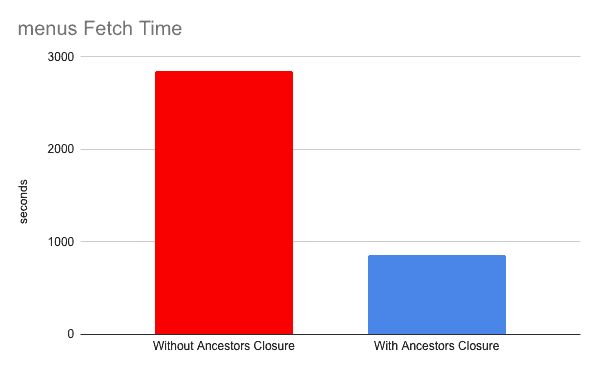 For the find common ancestor use case, we constructed a completely synthetic benchmark. We made a repository that had two branches, each with 99,000 unique linear commits, and a common ancestor as the parent of the start of their linear chains. Then we simply ran dolt's find common ancestor algorithm against the two branch heads and collected statistics about how long it took. This got over 5 times faster.

These tests were run with fast local storage but having the materialized commit closure still made things a lot faster.

This is a near at hand change that materially improved performance for the use cases we were targeting. We're decently happy with it, but we also know this can't be the end of our explorations and innovations in this area. Write amplification and storage amplification on point edits in prolly trees, including appends in the Ancestors prolly tree, is something we're actively working on in Dolt, because the overhead associated with these common types of changes is simply too high right now. We're excited about what the future holds for Dolt on the OLTP front and to continue to expand its feature set and performance profile to support more and more use cases.