Dolt is a MySQL compatible database with Git like features. Until recently, if you wanted to run Dolt as your OLTP database you had to stand up your own instances deployed with the Dolt binary, and then handle all your own monitoring, alerting, and upgrades. On May 18th, we launched Hosted Dolt. Tim covered the features of Hosted Dolt in his Hosted Dolt Launch Blog. If you want to know what Hosted Dolt is I'd recommend you check out that blog. In this blog I'm going to talk about the infrastructure behind the product, and the decision to use Dolt as our production OLTP server.

The diagram below shows the key pieces of infrastructure used to run https://hosted.doltdb.com. 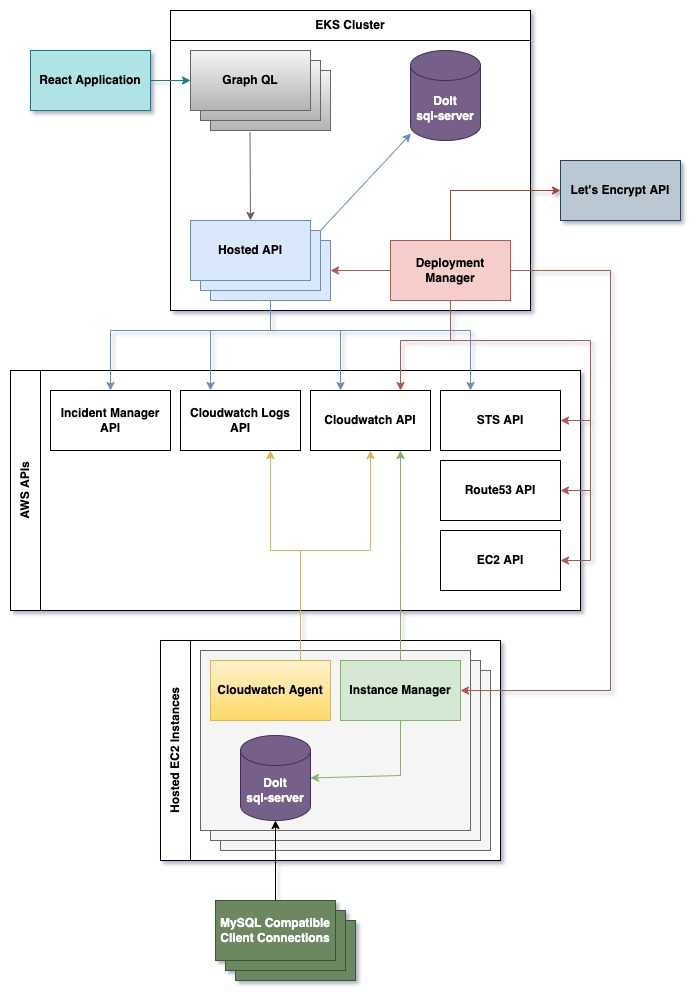 In building https://hosted.doltdb.com we used many of the same technologies used on DoltHub. Our website runs on React. It communicates with GraphQL servers which provide a translation layer for the Hosted API. The Hosted API is a Golang service providing GRPC endpoints which drive the website, and the hosted control plane. All state is managed through a Dolt sql-server instance.

The Deployment Manager is a Golang service which polls the Hosted API to understand what should be deployed. It also polls the EC2 API to understand what instances are currently running. It communicates with the running instances to get the health of hosted instances. With the full picture of what should be deployed, and what is currently running, it will use the EC2 API to create and destroy instances. New hosted instances are created using the user's spec and a prebuilt AMI. The AMI has the latest Dolt, Amazon's Cloudwatch Agent and our Instance Manager. After an instance is created we generate certificates, and create an A record using Route 53. Next it will generate either a self-signed cert, or a WebPKI certificate using Let's Encrypt's API based on the options selected by the user. Once that is complete the Deployment Manager will make a deploy request to the Instance Manager.

Also running on the instance, Amazon's Cloudwatch Agent handles pushing logs to Cloudwatch as well as getting host level metrics such as cpu, memory, and disk usage.

When we started building the backend for https://hosted.doltdb.com I thought we would use an identical tech stack to what is used on DoltHub. This means using Postgres as our OLTP DB. But the more I thought about it, the more I wanted to use Dolt instead. Dolt has some killer features that make it great choice for our application DB. First, the ability to clone the database in order to debug and develop locally is incredibly powerful. Also, in the case of an operational event, the ability to look at the diffs in the data and rollback changes can significantly help with our ability to recover from outages. Dolt also allows for the integration of CI/CD systems that can verify the quality of the data and look at how it's changed. These systems can look at things like the statistical variations of fields throughout the history of the commit graph.

Additionally, how can we tell others to use it for their applications if we aren't using it ourselves? This has many other benefits. We are learning a lot about operating our own software, and hitting errors before our customers do. As an example, failed Dolt transactions left the working set of a connection in a state with conflicts and did not automatically roll back changes. Dolt required you to resolve the conflicts, or rollback the transaction explicitly. The standard MySQL behavior automatically rolls back when a transaction fails, and the library we use to interact with our database relies on this behavior (Explicitly calling rollback after a failed transaction is a NOP). So we changed the behavior of Dolt to match that of MySQL.

Resolving conflicts is not something MySQL supports so requiring conflict resolution in order to continue after a failed transaction would cause problems when integrating with standard MySQL tools and libraries. In order to support a workflow that involves merging and conflict resolution, Dolt allows you to create branches, work transactionally against your branch, then merge your changes with changes made by other users. If merging your changes results in a conflict, you have the ability to see the cells in conflict, and resolve the conflicts using standard SQL syntax.

The launch of Hosted Dolt is an important milestone for us. It is something customers have been asking for, and it is a great proof that you can build applications using Dolt as your primary application database. We continue to work on improving the offering, and we have a long roadmap of killer features. Last week we added a support tab in order to cut incidents and page the on-call engineer, and this week we started work on backups. Come talk to us about Dolt on Discord. If you are interested in Hosted Dolt we'd love to talk to you and would be happy to give you a demo.