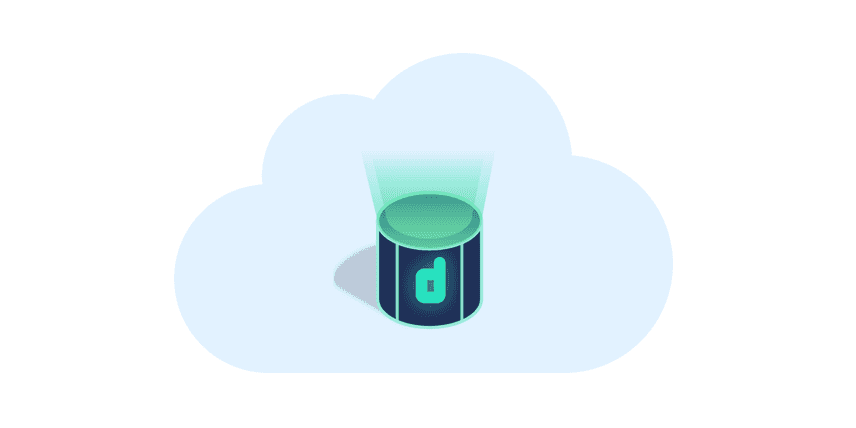 We'll provision CPU, memory, and disk in a cloud and region of your choice and run a Dolt database for you. We'll handle monitoring and logging. In the future, we'll handle backup, replication, upgrades, and a host of other administrative tasks so you can build your Dolt application without worrying about running a Dolt database yourself. Hosted Dolt is like Amazon RDS for Dolt.

For now, it's called Hosted Dolt. We're not sure about the name. What should we call it? DoltCloud? DoltRun? DoltBox? We like the three-letter word after Dolt pattern we have going with DoltHub and DoltLab. Stop by our Discord and give us some suggestions.

Hosted Dolt is where you rent a fully managed Dolt database from us. It's a brand new administrative website modeled after AWS Management Console or GCP Console. 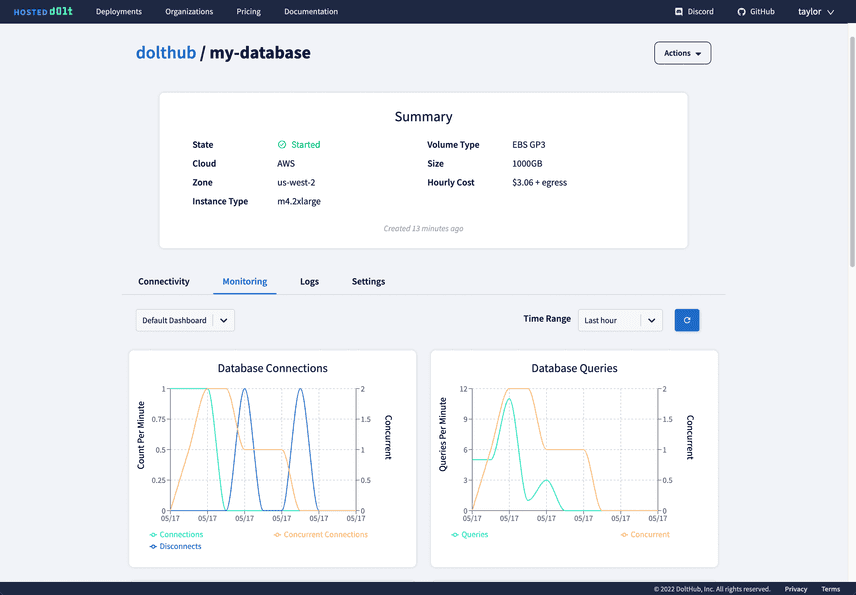 You use the administrative website to provision and manage a running Dolt database. Once you provision the database you connect to it with any MySQL client over the internet. When you're done with the database, deactivate it and we'll stop charging you for it. The intent of Hosted Dolt is to support application development. Anywhere you would want a cloud hosted Postgres or MySQL, you can use Hosted Dolt.

Dolt is the only SQL database with branch, merge, and diff. Imagine the applications you can build with those features. Or just run your current application on it and you have a much easier database to operate.

How to use it

Hosted Dolt is straightforward to use. 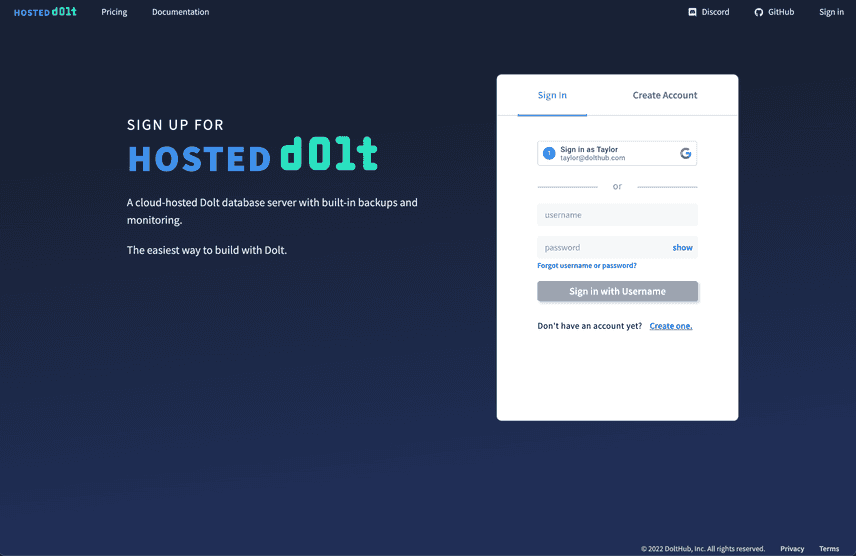 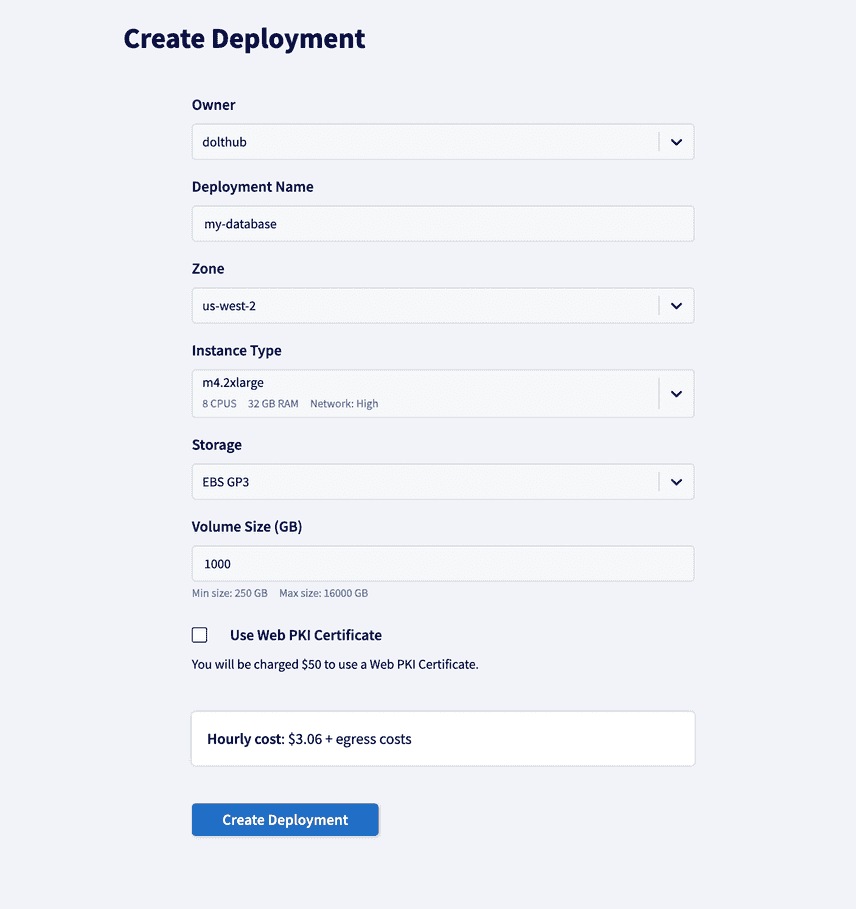 We'll charge the credit card you entered at the end of month for the hours you used.

Hosted Dolt has a control plane to provision cloud resources, deploy Dolt, and monitor running Dolt instances. When you create a deployment, we procure a dedicated EC2 instance and EBS volume for your Dolt database. We install Dolt and some dependencies on the provisioned resources and start Dolt server. We open a port accessible via the internet for any client to connect to. While your database is running we collect metrics and logging so you can monitor your running database.

We charge you hourly based on the size of instance and disk you provision. Instances starting at $438/month. Below find a pricing table for some common instance configurations.

Hosted Dolt has a separate account pool from DoltHub because Hosted Dolt does something different. Hosted Dolt is for running production databases and DoltHub is for collaborating offline on Dolt databases.

Dolt started as Git for data. We needed a place on the internet to share Dolt databases a la GitHub so we built DoltHub. DoltHub is a "remote" in the Git sense, an offline copy of a Dolt database used to collaborate with others. DoltHub will continue to serve that purpose.

Over the past year and a half, customers have come to us asking for Dolt to become a version controlled database. A version controlled database uses different design metaphors than Git for data. The "Hub" in the database context is the running master server. Applications connect to the master instance. In this context, branches as opposed to clones are used for isolation. We imagine eventually running a remote server on a running Hosted Dolt instance so you can clone, fetch, push, and pull from a running Hosted Dolt instance.

Like what you see on the Hosted Dolt website? Well, the database sitting behind the Hosted Dolt website is Dolt! When we built DoltHub, Dolt wasn't quite ready to be used as a transactional database so we used Postgres. But 2022 is Dolt's time to shine. We're confident Dolt can be used in production so we used it in production. Plus, we want all the clone, branch, and merge features to make operating our database easy.

What you are seeing today is the Hosted Dolt Minimum Viable Product (MVP). We have much more coming in relative priority order below. Please let us know if you'd like the order changed.

At launch there are no automated backups for hosted Dolt. If you destroy your instance without setting up a remote and pushing or taking a MySQL dump, the data is lost. Obviously we would like to rectify this using Dolt's backup functionality.

Dolt has a myriad of configuration options. Most of these can be changed on the running server by setting the appropriate system variable. However, we'd like to give users the option to start Dolt with specific configuration.

Hosted Dolt at launch supports a single running main instance. You can manually configure replication but we'd like to support hosted replicas.

A deployed Dolt stays at the version of Dolt that was current when the deployment is created. We're releasing new versions of Dolt at least once per week. We would like to build an automated and minimally invasive upgrade process.

Hosted as a remote

We imagine running a remote server on a running Hosted Dolt instance so you can clone, fetch, push, and pull from a running instance. Find a problem with your production database? Clone a copy to your desktop and start debugging. Never connect to production to run queries again.

Finally, we would love to have hosted instance come with our web based SQL Workbench plus collaborations user interface. The database page on DoltHub would be great on a Hosted instance. Pull requests on your running database anyone! 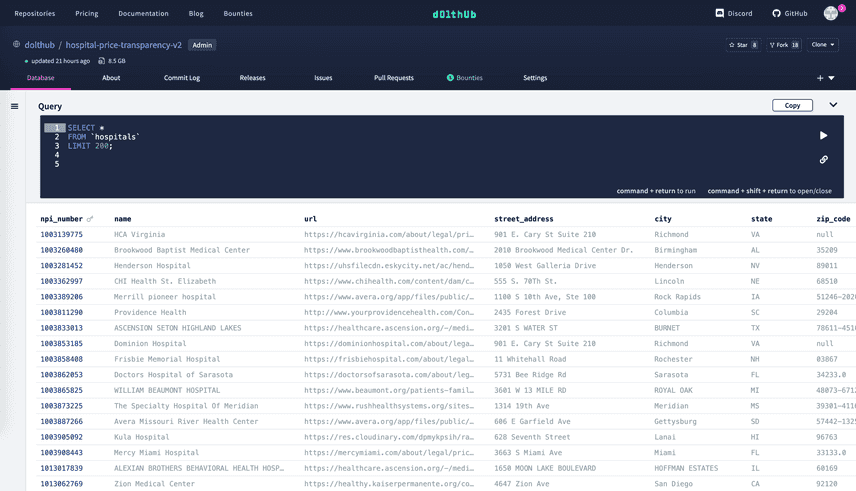 As you can see, we're just getting started with Hosted Dolt. But it's ready to test right now. Sign In. Create a deployment. Connect with any MySQL Client. Build! Questions or feedback? Come join us on our Discord or file an issue on GitHub.