If you want to work with a database, you probably want to get some data into it first. At Dolthub, we've spent a good chunk of time working on our table import feature which lets you import CSV, JSON, XLSX, and Parquet data into Dolt. In the past couple of months, we've added various improvements to our import path by reducing garbage size and increasing correctness. As our team has experimented with larger databases and as our users have gotten deeper with our product, we received complaints that imports were getting slower with very large CSV files (>10m rows). We weren't sure just how fast users should expect import to be. How much slower are Dolt's imports compared to other databases like MySQL? We've had success using sysbench to guide users on query performance. We think a similar benchmark would work well for tracking import performance. In this blog post, we'll discuss the benchmarking setup we put together to evaluate Dolt's performance vis-a-vis MySQL and some potential performance optimizations.

We considered the following set of independent variables:

We measured the following dependent variables:

We decided to generate 6 different CSV files according to the following schema:

These files are loaded into both Dolt and MySQL database instances in a containerized environment running in a Dedicated Kubernetes Node. This process is very similar to what we wrote about in our previous blog about performance-benchmarking.

Below is a chart comparing MySQL version 8.0.22 to our most recent Dolt version of 0.40.19. We are about 10x slower than MySQL with bulk imports.

These results were a little surprising to us. When we look at our sysbench write performance results we typically found ourselves at around 6x slower than MySQL. Why was MySQL LOAD DATA so much better than our import path?

I started profiling dolt table import and investigating MySQL's implementation of LOAD DATA to get a sense of what was going on. Here's an example Pprof that I worked with. 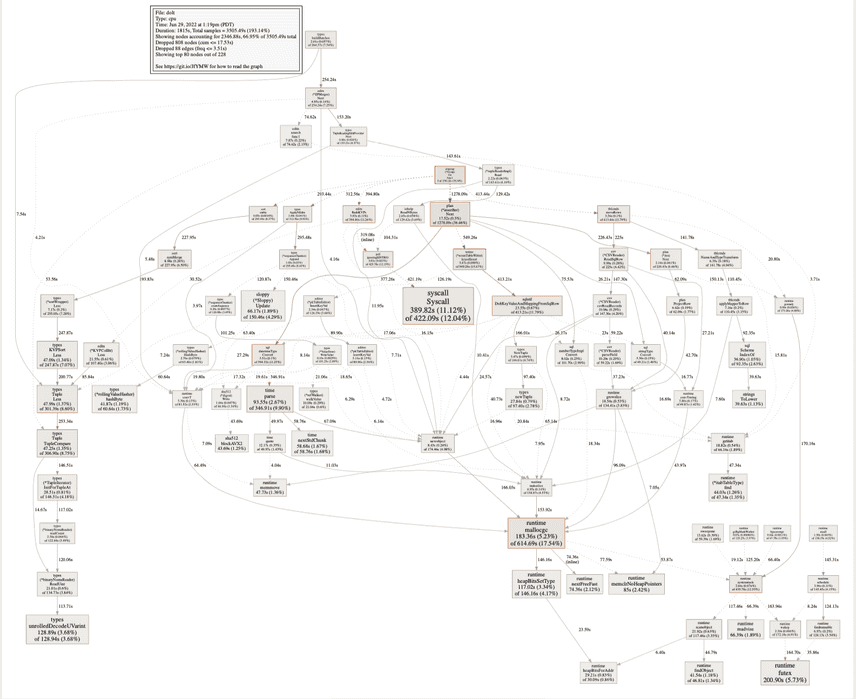 From an implementation perspective, we're also missing some features that can improve our performance.

Dolt is well on its way to becoming a serious 1.0 database that is useful in any engineering organization. As we mature, we are going to spend more resources creating benchmarks ranging from systems tables to our aggregation queries. And of course, we'll make these benchmarks faster :). If database performance is your thing feel free to hop on our Discord and learn more!