When DoltHub was founded it was called Liquidata. The goal was to bring liquidity to the data market. The founders realized that the pipes were broken: sending around CSV, JSON, and other formats was broken. The requirement to translate to and from formats without formal type systems at both ends of the "pipe" was an unacceptable degree of friction: 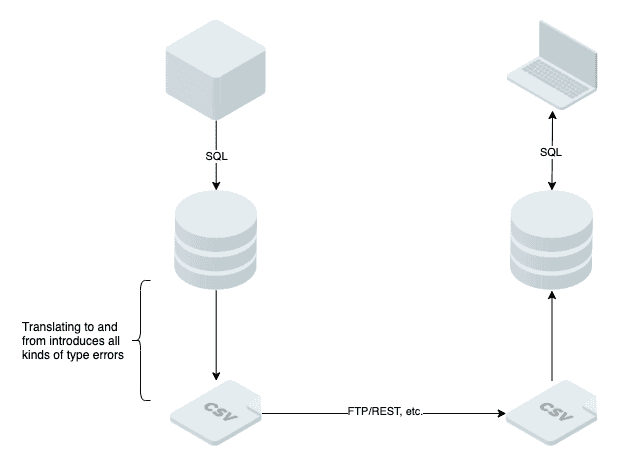 Searching around for an example of a good user experience for data transfer, the one we liked most was Git remotes:

Or if you already have the repository you can just as easily grab the latest changes:

But "Git for data" did not solve the friction we had identified. For one, CSV and JSON files can distributed via Git remotes. Furthermore, that doesn't solve for a primary source of friction identified above, which is translating data to and from formats such as CSV and JSON, and internal data storage formats.

SQL is by far the most ubiquitous way to describe and query data. Even where SQL is ultimately not a suitable interface for the end use of data, it is often used to define data pipelines that feed data into more specialized storage layouts. We concluded that if data arrived in a SQL queryable format, we could deliver a significantly streamlined user experience for data distribution: 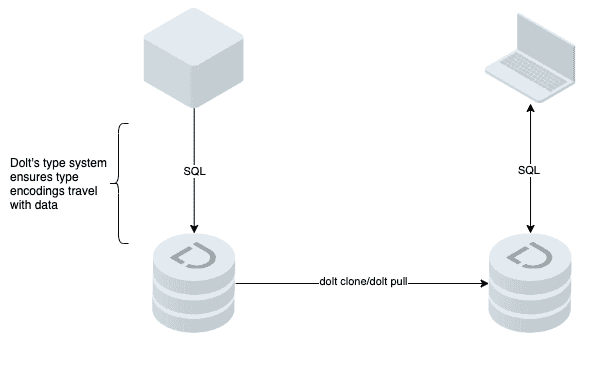 We chose to combine concepts from Git and SQL to create a version controlled database motivated by our desire to deliver frictionless data transfer. We imagined users cloning datasets, and spinning up a SQL server, all with a single tool. We called it Dolt.

These two goals are somewhat in tension. A relational database server uses SQL as an interface, often to a remote process. By contrast, Git version control uses a CLI acting mostly on local files, often with complex multi-step workflows. We also imagined that a core use-case for Dolt would be as a collaboration tool for building databases, meaning porting Git concepts to SQL was not an option.

Before digging into how we attempting to strike this balance, it's worth briefly investigating the API surface area of some popular relational databases.

Most users interact with relational databases via issuing SQL statements to a remote server process. However, not all tasks for operating traditional relational databases can be described in SQL. For example, tab completing the prefix pg on my Mac shows the following list of Postgres tools:

And likewise for the prefix mysql:

Since Dolt is a database, it has to address both of these concerns, as well as exposing version control semantics.

A Dolt instance is not just a server process running in a data center, but a full version history that can synced with a remote. Dolt's offline interface must allow users to administer their local database, while also exposing the git-style versioning tools that make that collaboration and sharing possible.

Once users have obtained data from a remote, however, they want to have a familiar SQL experience. That means the offline Dolt API must make it easy to transition from "administration", obtaining data and standing up the server, to a familiar experience of executing SQL queries via a connector.

To achieve these goals, we decided the offline experience would be best served by a user experience closely modeled on the Git CLI, with additional commands related to managing a running server. We also chose to implement the MySQL dialect, which means that Dolt can be used as a drop-in replacement for any existing application backed by MySQL.

Let's dive into the CLI. Running dolt dumps out the index of available commands:

Let's use the dolt clone command modeled off of Git to clone a database:

That was quite familiar from Git, even the printing out of chunks. Now to query our data, we'll start the server:

A Dolt SQL Server instance is now running on port 3306, using the ip-to-country database we just clone from DoltHub.

We chose SQL as a query interface because it is widely adopted, and MySQL in particular because of a rich ecosystem of connectors. We also wanted users to have the familiar Git-like experience of managing their data, and seamlessly transition to executing queries in a familiar language.

We can now see the magic of "just working" as we use the off-the-shelf MySQL connector to connect to Dolt and have a familiar SQL query interface:

We set out to build a database that provided version control features to solve for modern data infrastructure needs. This entailed combining two models. So far we showed a lightly augmented Git interface for the offline experience, and a generic SQL query interface for when Dolt is running a server process.

But to fully realize the value of our creation requires exposing version control in SQL. This where the real API challenge arises, as we try and figure out where to augment existing SQL functionality to work with an underlying commit graph, and where to implement functions that take care of concerns that don't fit in a declarative syntax.

A good example is AS OF syntax. This is a SQL standard feature that is there to expose "system versioning." MariaDB supports this when turned on, for timestamps. But since Dolt stores its version history in a commit graph, it understands not only timestamps, but also commit hashes, branch names, and refs such as HEAD~:

Other version control features are exposed via special system tables that can be incoporated into any SQL query. For example, to examine the commit log I can select from dolt_log:

For convenience, the entire set of CLI functionality is available in SQL with special functions. For example, you can check out a branch with a SELECT statement like so:

This concludes our tour of Dolt's native APIs.

Other relational database solutions do not generally provide higher level APIs outside of SQL. There exist many such APIs for SQL databases, but they are generally not part of the database itself. For example, SQL Alchemy is a library that provides Python native functions for manipulating various flavors of SQL database.

Dolt is a bit more complicated than existing SQL databases, merely because it has a slew of additional features that just make the possibility space larger. For example, there are combinations of common SQL queries and version control operations that users might regularly combine. We believed there existed a sufficient number of these to justify a higher level Python API designed to make it easier to integrate Dolt into existing data infrastructure.

In the next part of this post, tomorrow, we will do a deep dive on the latest iteration of Doltpy, our Python API for interacting with Dolt.

We reviewed how Dolt combines concepts from Git and MySQL, and where necessary innovates, to bring a relational database with novel features to market. If those features sound exciting to you, give Dolt a try, or get in touch with us. Our next post will show to seamlessly script data pipelines that incorporate Dolt using the latest version of Doltpy.