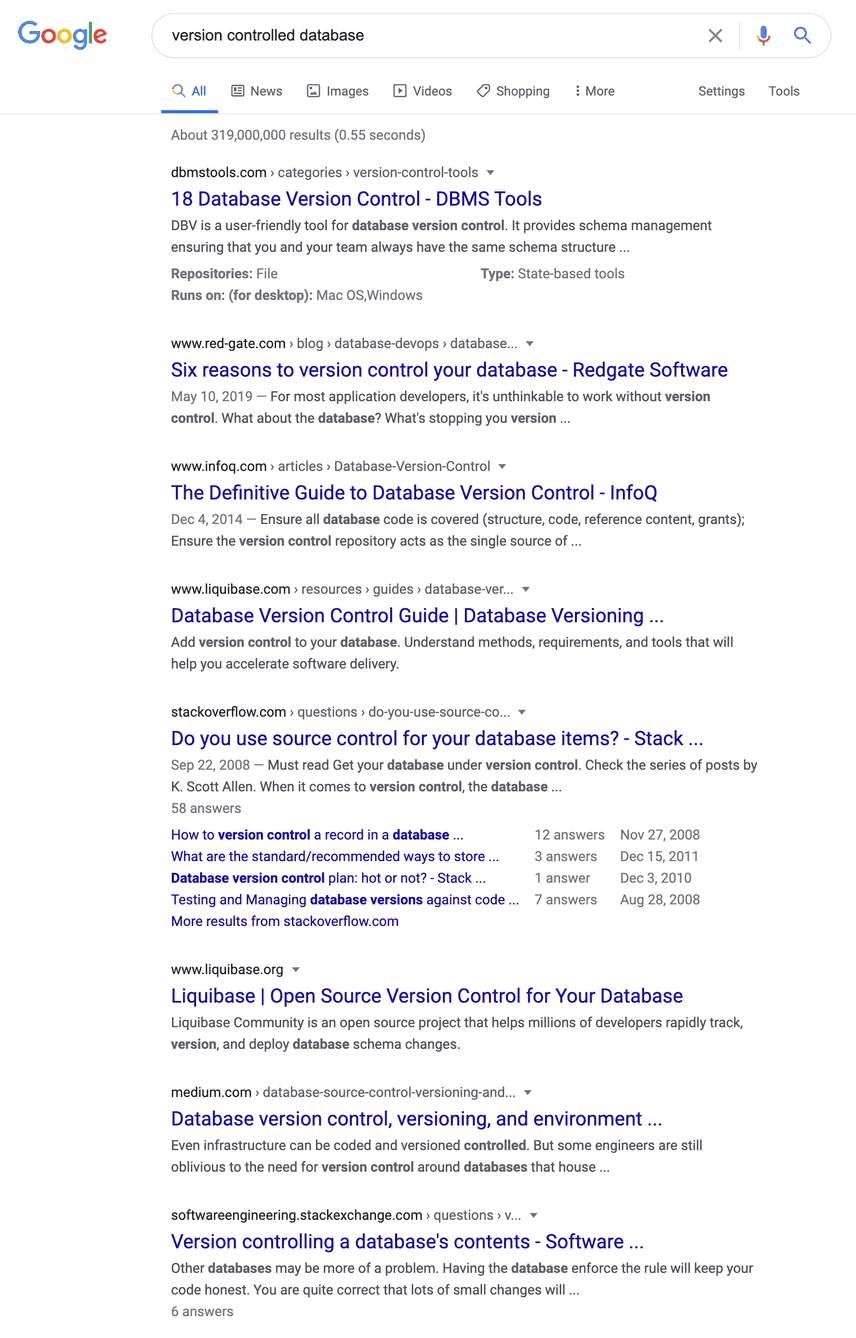 To make our case for reclaiming this term, it's worth being precise about the distinction we are trying to draw: 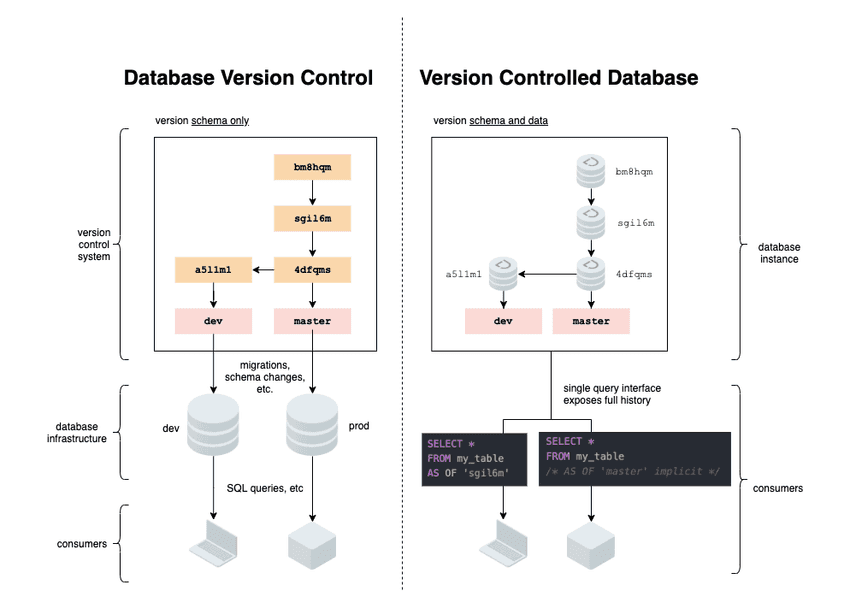 The diagram highlights the nature of the difference between a set of best practices and tools, and a database product:

This distinction brings us to the features that define "version controlled databases" as a category: the ability to store a history of its state, along with some version of branching, merging, and diffing across the stored history.

In a blog entitled Software 2.0, Andrej Karpathy, a machine learning and artificial intelligence researcher and practitioner, describes a world where computer behavior is increasingly determined by data rather than code. You don't have to be an AI or ML cheerleader to recognize the increasing importance of data in determining the behavior of production systems. Ultimately, the value of data is increasing. Separately, storage costs of data have been in long run secular decline. These two factors combined with the advent of Merkle tree make it tractable to expose a full data history to a query interface, and therefore to build true version controlled databases.

We identified the fundamental features of a version controlled database as both the ability to store a history of the database state, as well as version control primitives such as branching, merging, and diffing.

Branching and merging are fundamental primitives for collaboration. They allow users to work concurrently against the same base dataset, and then resolve their differences in a principled and robust way. These capabilities differentiate version control databases from existing solutions by enabling users to collaborate on datasets without application layer code. The existing paradigm for databases imagines a single concept of state, and any tools that permit versioning and reconciliation need to be built into the application layer.

Robust computation of "diffs" is not just useful for review, it is what enables version control systems to effectively implement operations like clone and pull. By implementing efficient diffs across their history, version control databases make for excellent data distribution formats. Users can clone and pull datasets, instantly querying strongly typed data using the database's query interface. The concept of "loading" data becomes redundant, and a whole class of errors defined by data type corruption is eliminated. It shouldn't be necessary to figure out what strings a data vendor uses to signify NULL, it should be native to the distribution format.

These features combine to provide much needed capabilities to data science and data engineering teams, and whoever else might have use for them. In particular

In summary, we believe that version control databases can enable teams with powerful capabilities that they would otherwise have to invest considerable engineering resources in building and maintaining on top of existing database solutions.

If you've gotten to this point, it's likely that you are at least curious about what the landscape of products in this category of databases looks like. Naturally there are options other than Dolt, and for some use-cases those options might be the best fit.

TerminusDB is a graph database, which means that data is described and queried in terms of graph data structures. It implements its own query language. TerminusDB is inspired by Git, and supports branching, merging and diffing in a Git-like interface.

Dolt is built on top of Noms. Noms is a Git-like distributed database that provides storage for structured objects defined by Go structs. Noms provides versioning and synchronization primitives for both the object definitions themselves, and values those objects take on. Users interact with Noms via Go code.

Irmin is a storage layer agnostic database inspired by Git, and written in O'Caml. Users define objects in O'Caml that can then be stored using Git-like semantics. It is quite similar in spirit to Noms, but instead of Go structs, users describe, create, and update their data in O'Caml code.

Dolt is our entry into this novel category of database. Dolt is a SQL database that implements the MySQL standard. Dolt leans heavily on Git, and implements branching, merging, and diff operations, and other Git primitives where relevant.

This design decision does not come without costs. The underlying commit graph storage is not a natural fit for a SQL query engine, and implementing a super set of MySQL on top of that storage layer is a huge technical commitment. Not only are we committed to matching everything MySQL can do, but we also have to design a set of functions to expose the commit graph in our SQL engine.

The software industry has long considered version control something that is done to databases, not a feature of databases. At DoltHub we consider "version controlled database" to be a product category, and Dolt is our attempt at a product that fits in that category.

Version control databases are not competitive with the practice of version controlling your database schema, or products that implement that practice. Instead they are a relatively novel category of databases differentiated by features that cater to users who care about capabilities that support collaboration, versioning, reproducibility, and distribution. By making these capabilities native to Dolt we hope to enable users to elevate the quality of their data infrastructure without the need to write and maintain application code, as well as open up possibilities that simply did not exist before.

If you want to talk to us about how you might use Dolt, or DoltHub, feel free to get in touch via email, or join us on Discord.