Common table expressions (CTEs) are also known by their keyword, WITH. They're basically syntactic sugar that let you avoid copy-pasting the same subquery into a large query that uses it multiple times. So for example, if you were trying to find all combinations of cities that share a zip code and start with the letter 'A', you could write it as two subqueries joined together, like this:

For some queries, using subqueries like this is the only feasible way to express them! For example, let's say that for some reason I only want matches from the first 100 A cities, sorted by name. I could write:

CTEs let you write the query so you specify the subquery exactly once, rather than repeating yourself. This is pretty important as your subqueries keep getting bigger, since you only have to edit them in one place. Here's the more complicated query written with CTEs:

You can do even more complicated things with CTEs, like define a CTE that refers to another. This is legal:

And of course a subquery expression can define its own CTEs (that themselves can refer to outer-scoped CTEs). This is legal:

The first step is just parsing a CTE. They're basically the same as Subqueries, just with a different syntax to declare them. So let's declare a new With node type that contains one or more CTEs represented as subqueries, and populate it.

The idea is that if a SELECT statement defines any CTEs, we'll wrap the entire query plan in a new With node that captures those expressions.

Now we just need an analyzer rule that knows how to take a With node and do the substitution of the subquery everywhere it appears in the query. Because the With node being at the top level might interfere with other analyzer rules, we want to do this as soon as possible, before most other phases of analysis. So we add our new rule very early, even before we do things like resolve tables.

Now for the rule itself, we just perform the substitution. The only tricky thing about this is the special case of subqueries, which means we have to do several passes.

There's a little bit of complexity hidden here around naming the columns in the schema of the CTE, but mostly this is it. Let's look at what this transformation function does to the query as represented as a tree of nodes. This example query is lifted straight out of an engine test meant to exercise the functionality above. The query:

The CTE named mt1 has a tree representation that looks like this:

During analysis, you can see this definition get plugged into the larger query. Any UnresolvedTable named mt1 gets replaced by the definition of the CTE. Also note that these parts of the tree are wrapped with TableAlias nodes, since every instance of a CTE must have a distinct alias in a query.

Like many extensions to the query engine, the idea is simple but the execution is riddled with minor details that are hard to get right. Tests are essential! 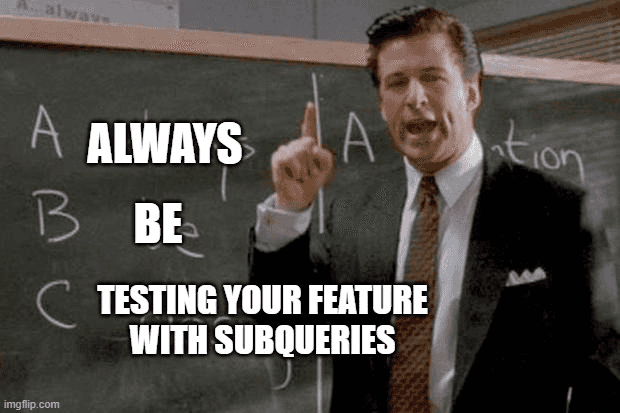 Support of common table expressions brings Dolt one step closer to our goal of being a 100% drop-in replacement for MySQL. In practice, we are already there for a surprisingly large number of use cases. But getting that last 10% of support is going to take the last 90% of the work.

Try Dolt today, or come join us on Discord to talk to us and other customers. Tell us what SQL features you want to see developed next!